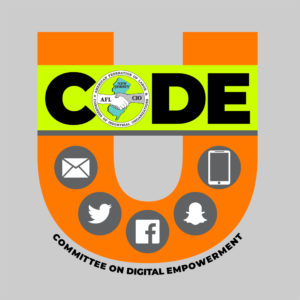 The New Jersey State AFL-CIO has created a cutting-edge program called CODE-U (Committee on Digital Empowerment — Union) to provide coordinated messaging for affiliates to use on their social media networks.

The concept is simple: We provide sample messages for use by affiliates, everyone follows a simple weekly schedule, and together we create a massive online political education echo chamber.

Here’s the schedule for you to send CODE-U Messaging to your members:

Union members, family and friends. Your future is at stake. Vote by November 8.

Protecting Workers’ Rights. These candidates are strong supporters of the right to organize, respect collective bargaining, and respect public service They know unions are a pathway to the middle class and they will support veteran’s preference for public sector work and prioritize workplace safety. They support project labor agreements and oppose privatization of city services.

Education, Opportunity, and Jobs. These candidates believe that everyone in Trenton deserve access to good public schools and good union jobs. They support smart economic development, skills training, and registered apprenticeships. They will work with existing businesses to grow our economy.

Many Communities, One City. The candidates know that the strength of Trenton lies in our diversity. They appreciate all the many communities of Trenton and will work to make sure everyone has clean and safe streets and that working families, seniors, and children get the support they need.

VOTE BY MAIL: Complete and return a vote by mail application by Nov. 1.

For more information about the candidates, voter registration, vote by mail and more visit your union voter resources page www.njunionstrong.org

However you decide, please vote! 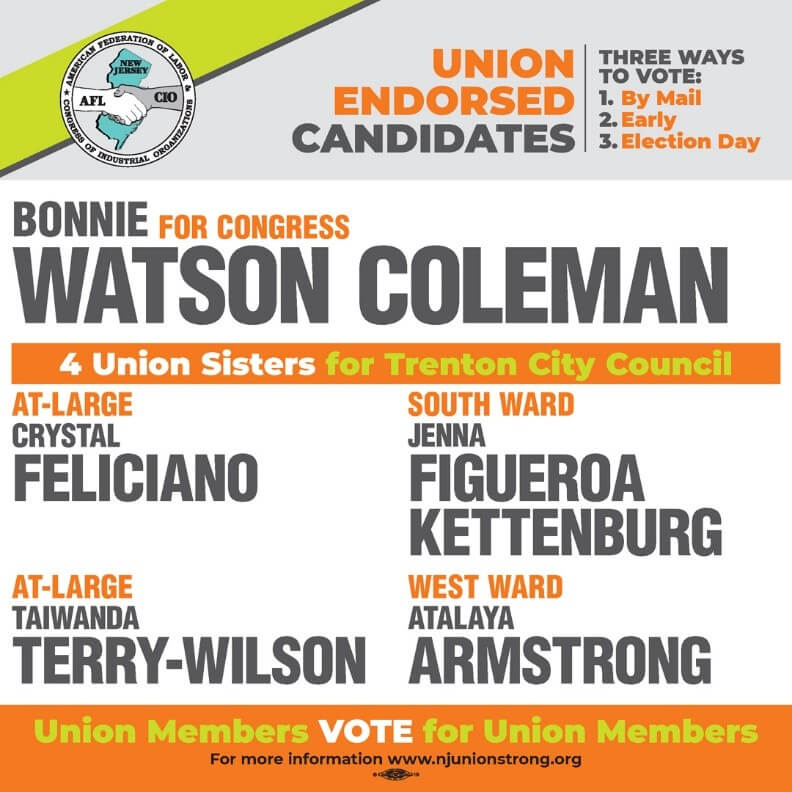 As a union member living in Trenton, you have the power to change Trenton for the better! Four union sisters are running for election to Trenton City Council. Atalaya Armstrong, AFSCME 2285, Jenna Figueroa Kettenburg, CWA 1038, Crystal Feliciano, AFSCME 2286, and Taiwanda Terry-Wilson, CWA 1033 are the union choice, endorsed by the New Jersey State AFL-CIO and the Mercer County Central Labor Council.

All four union sisters will stand up for workers’ rights. They understand first-hand the right to organize and collective bargaining respect public service. They know unions are the pathway to the middle class, support veteran’s preference and will prioritize workplace safety. They support project labor agreements and oppose privatization.

All four union sisters  believe that everyone deserves access to good public schools and good union jobs. They support smart economic development, skills training, and apprenticeships. They are committed to growing Trenton’s economy by working with existing new businesses that will attract good jobs for Trenton residents.

All four union sisters believe that the strength of Trenton lies in its diversity. They appreciate the many communities and will make sure everyone has clean and safe streets and that working families, seniors and children get the support they need.

Voters have three choices on how to cast their ballots this year: by mail, by early voting, or by traditional voting on Election Day.  A vote-by-mail application must be received by November 1. Early in-person voting will take place October 29 through November 6.  Election Day is November 8.  All three voting methods are easy, convenient and secure.  To find out more, please visit your voter resource www.njaflcio.org/labor2022.

However you decide and whichever voting method you choose, we encourage you to make your voice heard. VOTE on or before November 8th! 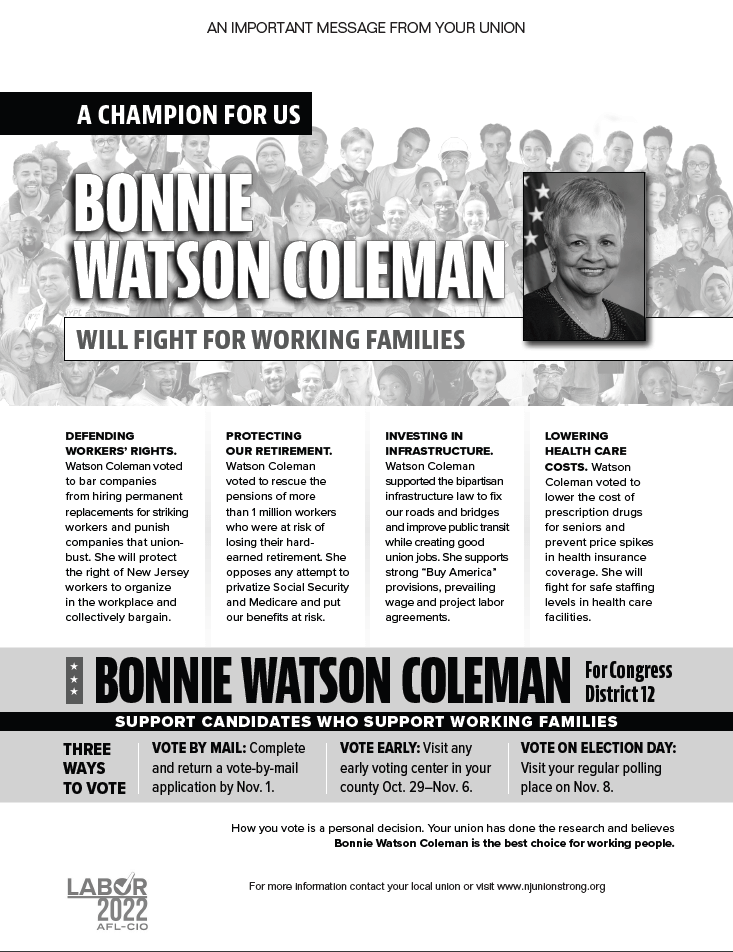 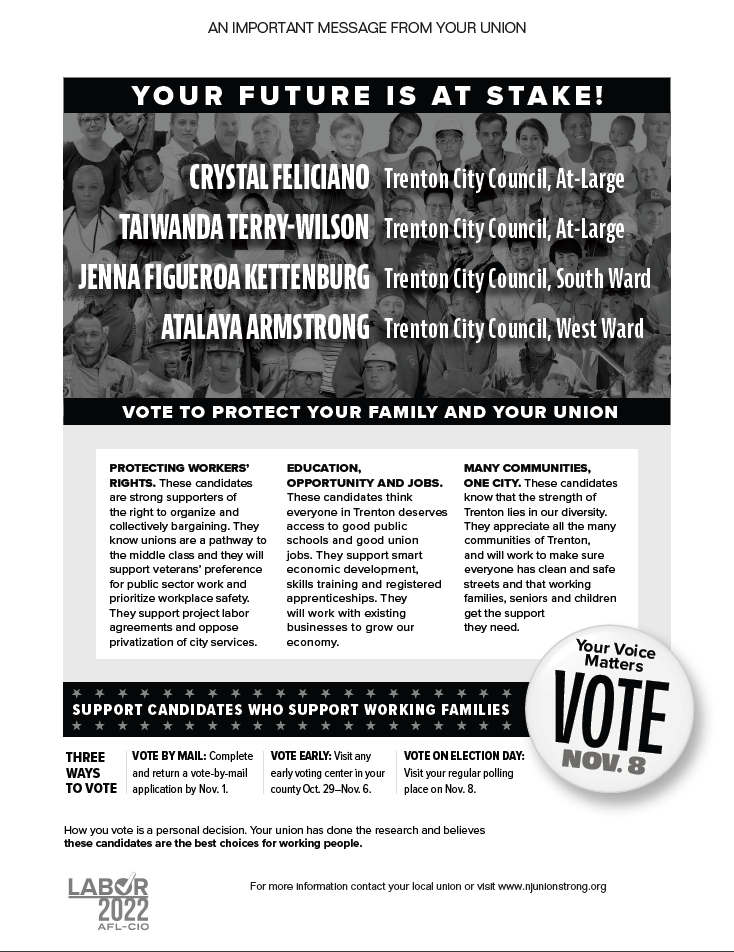 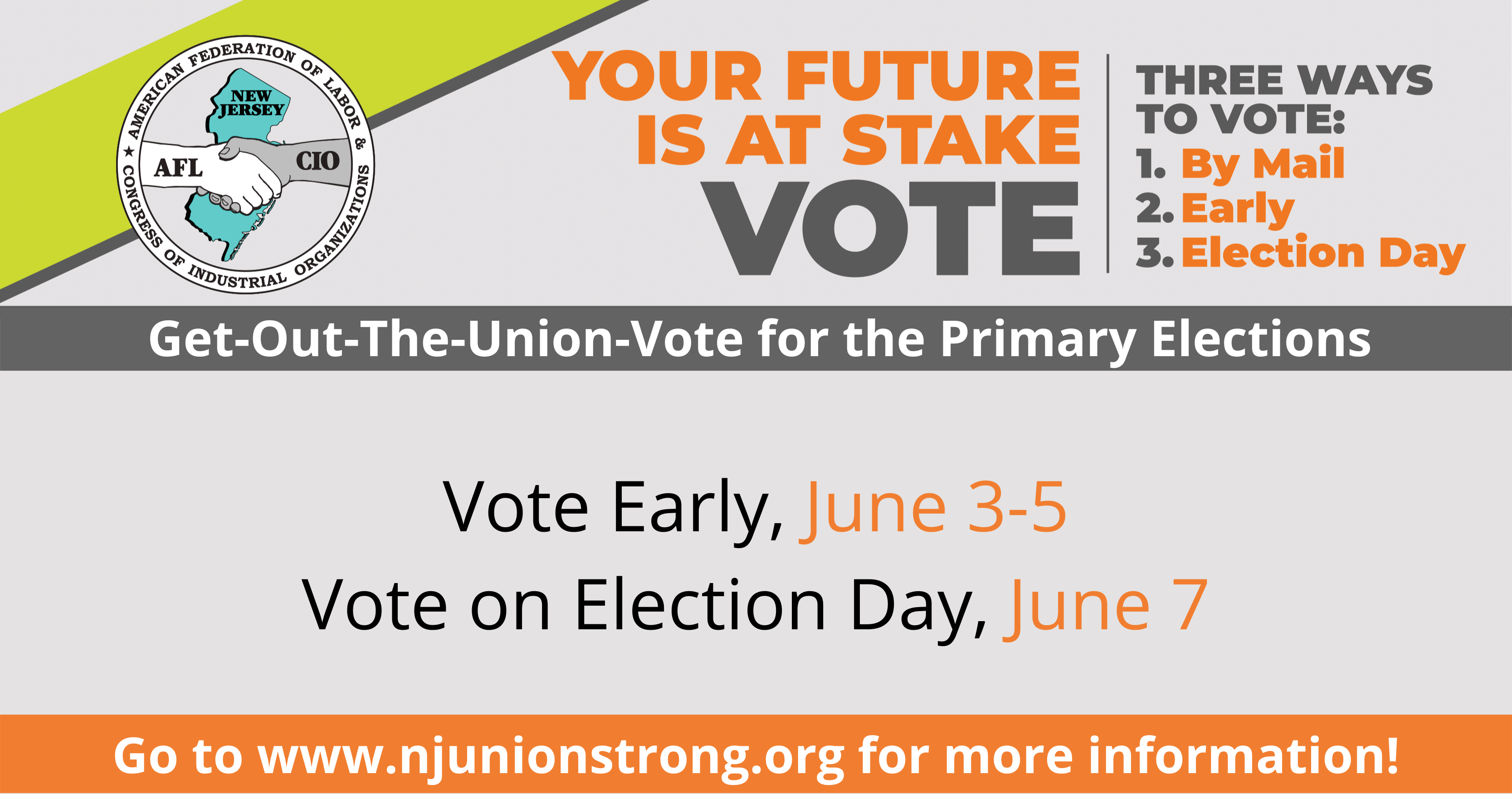 Union members, family, and friends. Your future is at stake. Vote on or before June 7th in New Jersey’s Primary elections. Every registered voter is encouraged to vote.

There are three ways to vote in the Primary Election.

Union members and advocates for working families and our unions are running for election to the
U.S. House of Representatives, County Commissions, as Mayors and members of City/Town Councils and Committees. Don’t sit out these important elections! Make your voice Heard!

Every year, the affiliated unions of the New Jersey State AFL-CIO vote on which election candidates to endorse based on their voting records and stances on working family issues. Our state federation has a proud history of endorsing both Democratic and Republican candidates who support working families and the core values of the Labor Movement.

Working in partnership with the AFL-CIO Political Department, New Jersey’s Central Labor Councils, Building Trades Councils and affiliated local unions, our COPE program coordinates a statewide effort to educate union members about our endorsements and the benefits of voting for candidates who will put working families first.