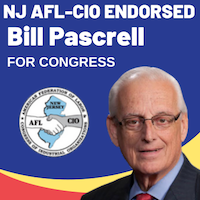 Throughout his tenure as a member of the U.S. House of Representatives, Congressman Pascrell has distinguished himself as a leading voice for labor and America’s working families.

Congressman Pascrell believes a strong economy is critical to the quality of life for all Americans. Chief among his concerns, as a member of the House Ways and Means Committee, is the redistribution of wealth caused by Trump’s misguided tax policies that have redirected wealth to the wealthiest 1% of Americans. Congressman Pascrell is an advocate for tax fairness and maintains that the federal government should use its resources to invest in critical infrastructure improvements and lessen the financial burden on middle-class Americans.

Congressman Pascrell was a strong supporter of H.R. 2, the overdue legislation that increased the minimum wage from $5.15 to $7.25 an hour and gave up to 13 million Americans a much-deserved pay raise. He was also an original cosponsor of H.R. 1409, the “Employee Free Choice Act”, which aims to restore workers’ rights by removing obstacles that prevent workers from choosing whether or not they want to form or join a union. In addition, he has remained a strident opponent of threats to federal labor standards, believing that all workers are entitled to economic prosperity in safe conditions.

According to Congressman Pascrell, the decline of American jobs is tied to our nation’s international trade policy. A representative of a district whose economy is dependent on manufacturing, he supports trade policies that recognize the need to export our quality American products rather than simply importing goods made abroad. Ultimately, he believes we need to be cautious in conducting our trade policy, and he has worked to create a new paradigm for international trade agreements that provide real labor and environmental protections.

As a member of the exclusive Health Subcommittee of the House Ways and Means Committee, Congressman Pascrell worked on the Patient Protection and Affordable Care Act, which helps 32 million uninsured Americans afford health insurance through new state-by-state marketplaces. He claims that in the 8th Congressional District, the bill will prevent 900 families from filing bankruptcy as a result of medical bills and give 47,000 young adults the option of staying on their parents’ insurance as they go to college. Ultimately, as he continues to work on health issues within the Ways and Means Committee, Congressman Pascrell is committed to making health care coverage more affordable for all New Jersey residents and keeping the health care system accountable to you.

Congressman Pascrell has consistently been an advocate for the rights and priorities of working families. However you vote on November 6 is your decision, of course, but we at the New Jersey State AFL-CIO have done our homework, and we believe Congressman Pascrell is the best choice for District 9.