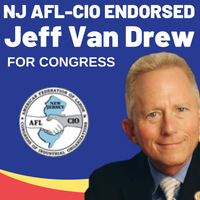 The New Jersey State AFL-CIO is proud to endorse Jeff Van Drew in his campaign for the 2nd congressional district. Van Drew is a true friend of working people and will fight side by side with us to defend our rights when they’re under attack.

“Organized labor is the backbone of our economy, and they have always been at the forefront of creating good, middle-class jobs,” Van Drew said. “I’m proud to work with the AFL-CIO to grow our economy and ensure that workers in South Jersey have access to opportunity and fair wages. As a State Senator, I’ve always stood by organized labor, and I will continue to fight for our workers and middle-class families in Congress.”

Van Drew, a practicing dentist from Dennis Township, has a firsthand understanding of the American healthcare system and the need to make it both accessible and affordable. He supports reforms to the Affordable Care Act that protect our families and small businesses, and he will work to lower the cost of healthcare and prescription drugs.

Recently, Van Drew made headlines for demanding that VA Hospitals be held accountable for failing our veterans. “The brave men and women who served our country deserve the best possible healthcare, and these failings are disgraceful,” he said. “We need immediate corrective action and institute real accountability, nothing short of a complete revamping of the VA hospital system will suffice.”

As a state lawmaker, Van Drew has always fought for tax cuts that benefit our families and small businesses that create local jobs. He supports a tax cut that benefits hard-working, middle-class families—not multi-millionaires and corporate giants.

The Great Recession, coupled with the collapse of four casinos and the loss of 10,000 jobs, hit South Jersey harder than almost any other region in the United States. However, as your Congressman, Van Drew will fight tirelessly to bring jobs back to South Jersey.

“My top priority in Congress will be to find ways to bring economic opportunities and good jobs to South Jersey,” Van Drew said. “Thousands of people in the district lost their jobs during Atlantic City’s downsizing, and the region is still feeling the ripple effects. I want to ensure that reforms to the nation’s tax structure, health insurance system, and trade policies are beneficial to South Jersey families and business owners, which will require ongoing vigilance and attention to detail.”