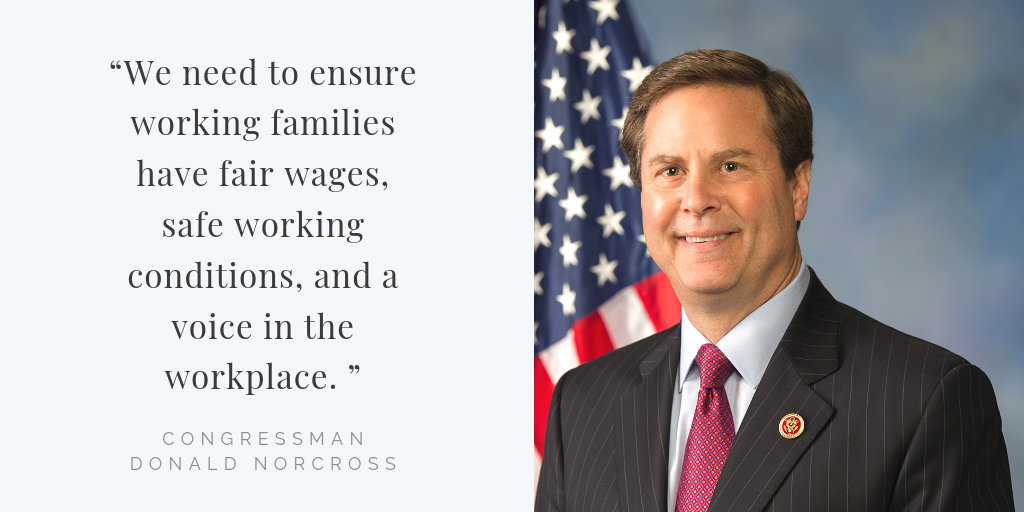 Rep. Donald Norcross, a New Jersey State AFL-CIO Labor Candidate, is leading the charge on yet another pro-worker bill. The new bill, the Protect the Right to Organize (PRO) Act of 2019, would modernize the National Labor Relations Act (NLRA) and strengthen the collective power of workers to negotiate for better pay and working conditions.

“Congressman Norcross is a shining example of a Labor Candidate. Time and time again, as both a union member and a U.S. Representative, he has proven that he is committed to improving the lives of America’s working families,” said New Jersey State AFL-CIO President Charles Wowkanech.

“The New Jersey State AFL-CIO commends Congressman Norcross for taking action on this important bill and for his continued effort to strengthen the voice of our labor movement,” President Wowkanech added. “We are extremely proud to have him as a representative of our Labor Candidates Program.”

The NLRA was designed to encourage collective bargaining in the workplace. However, many employers maintain policies that restrict workers’ abilities to engage in activities protected by the NLRA, and the law lacks a credible deterrent for employers that retaliate against workers who exercise protected rights.

The PRO Act seeks to amend the NLRA, bringing its remedies in line with other workplace laws. Not only would the bill enforce strict financial penalties on companies and individual corporate officers who violate the law, but it would also strengthen protections for employees engaged in collective action, expand coverage to more employees and facilitate a process by which workers and employers can reach a first collective bargaining agreement. In addition, the bill would eliminate right to work laws, safeguard the right to strike and ensure fairness in union representation elections.

The PRO Act was introduced on May 2, 2019 and has garnered tremendous nation-wide support, with 140 U.S. Representatives signing on as co-sponsors. The New Jersey State AFL-CIO thanks all of the co-sponsors of this important bill, especially the eight Representatives from our state, and we look forward to working with them to strengthen the collective power of workers and improve the lives of our nation’s working families.