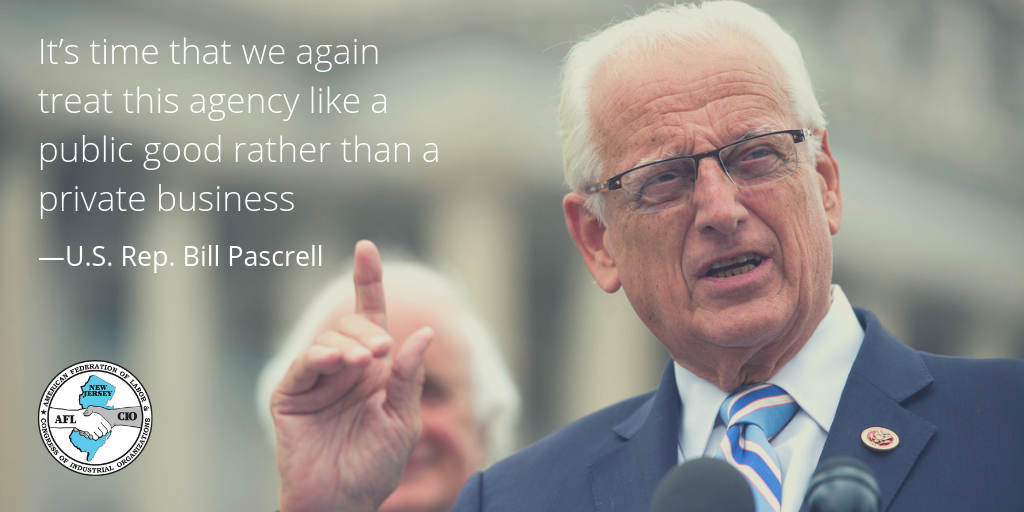 The New Jersey State AFL-CIO is pleased to announce that U.S. Rep. Bill Pascrell, Jr. (D-NJ-09) has offered a bipartisan amendment to the Financial Services and General Government appropriations bill, allocating $1,000,000 in funding to establish a modern postal banking system.

Rep. Pascrell’s amendment, cosponsored by Reps. Mark Amodei (R-NV-02) and Ayanna Pressley (D-MA-07), was approved on the floor of the House of Representatives Monday.

“Ninety percent of zip codes lacking a bank or credit union are in rural areas. Bank branches are also sparse in low income urban areas. Approximately 46 percent of Latino and 49 percent of African American households are underbanked,” Rep. Pascrell said in support of postal banking. “Think about that. Democrats and Republicans alike could derive enormous benefit for their constituents. Talk about uniting America!”

Rep. Pascrell, regarded as one of the strongest supporters of the United States Postal Service in Congress, has vehemently opposed any attempts to privatize the post office and is calling for the preservation of this vital service. In his essay, “Congress is Sabotaging Your Post Office,” published in Washington Monthly last April, the congressman outlines the history of the post, the origins of its decay and his remedies to undo decades of institutional damage. “It’s time that we again treat this agency like a public good rather than a private business,” he writes.

Rep. Pascrell is also an early cosponsor of H.R. 2382, the USPS Fairness Act, which would finally repeal the crippling health care prefunding requirement that is bankrupting the post.

“Throughout his tenure as a member of the U.S. House of Representatives, Congressman Pascrell has distinguished himself as a leading voice for labor and America’s working families,” said New Jersey State AFL-CIO President Charles Wowkanech. “The New Jersey State AFL-CIO commends him for his actions on this important amendment, which would not only revitalize the United States Postal Service, but also provide a valuable service for millions of Americans who lack access to adequate banking services.”