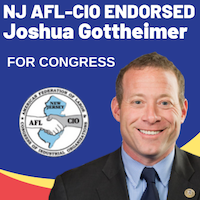 The New Jersey State AFL-CIO is proud to endorse Josh Gottheimer to represent New Jersey’s 5th Congressional District. Without question, we can count on Congressman Gottheimer to place the needs of working families first, and he is determined to make living in New Jersey more affordable.

Congressman Gottheimer is committed to lowering taxes and getting 5th District residents a better return on the tax dollars they already send to Washington. Working with Fifth District mayors, councils, first responders, and towns, Josh has helped the Fifth District claw back $290 from Washington for every household in the Fifth District—a 16% increase from what the District has historically received. These dollars help first responders protect the community while offsetting the strain on local budgets and property tax bills.

“In New Jersey, our taxes are simply too high — and they need to be cut for families and businesses alike. But the Tax Hike Bill passed in Washington did just the opposite. Gutting the SALT deduction amounts to a seven percentage point tax increase on many of the residents in my District, making families and businesses less likely to come or stay in our state,” Congressman Gottheimer said in a press release. “I am proud of the New Jersey Tax Cut Plan we introduced back in January, and proud the legal basis for the plan was again affirmed by the nation’s top tax scholars this week. I’m doing everything I can to ensure that the new law is put into action quickly to deliver real tax cuts for New Jersey residents and families, including coordinating with the state to help Fifth District mayors put the plan into action quickly and pushing the IRS to meet with me.”

However you vote on November 6 is your decision, of course, but we at the New Jersey State AFL-CIO have done our homework, and we think Josh Gottheimer is the best choice for working people.