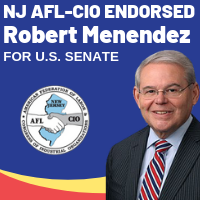 The New Jersey State AFL-CIO is proud to endorse Senator Bob Menendez. Since he was first elected to the U.S. Senate in 2006, Bob Menendez has fought to protect workers’ rights and to promote policies that strengthen and grow our middle class. His focus lies on ensuring fair treatment, basic rights, workplace safety, and a living wage for all workers.