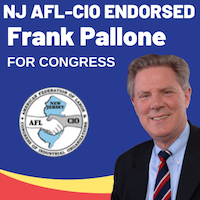 The New Jersey State AFL-CIO is proud to endorse Frank Pallone, the leader we want to send to Washington to represent District 6. A true friend and supporter of the labor movement, Congressman Pallone will always place the needs of working families first.

Here are the top 5 reasons to vote for Congressman Pallone on November 6:

Throughout his tenure in Congress, Frank Pallone has stood with New Jersey’s working families. He has consistently voted against bad trade deals, including the original North American Free Trade Agreement (NAFTA), the U.S.-Korea Free Trade Agreement (KORUS), and the Trans-Pacific Partnership (TPP). Currently, he supports policies that would significantly raise the minimum wage and implement equal work for equal pay and paid family leave.

2. Congressman Pallone believes all Americans should have access to high-quality, affordable healthcare.

Many of Congressman Pallone’s legislative accomplishments have been geared to toward making health care more affordable and accessible. As the Chairman of the Energy & Commerce Health Subcommittee during the 111th Congress, he played a key role in authoring and passing the Affordable Care Act. This landmark law extends health care coverage to millions of Americans, while driving down health care costs and reigning in abusive tactics used by insurance companies to deny medical treatment. Thanks to the Affordable Care Act, 105 million Americans no longer have a lifetime limit on their coverage and 5.1 million seniors have saved over $3.2 billion on their prescription drugs.

3. Congressman Pallone voted “NO” on the Republican tax plan that hurt New Jersey.

Congressman Pallone believes the American tax system should serve all Americans by growing our economy and supporting the middle class and those who aspire to reach it. He also believes that we should end unfair tax breaks that shield the wealthiest Americans from paying their fair share. This is why he voted no on the partisan Republican tax plan when it was considered by the House of Representatives. The newly enacted law disproportionately benefits the wealthy, sets caps on state and local tax deductions, and reduces the mortgage interest deduction. All of these changes negatively affect New Jerseyans, and ultimately, this tax scam raises the national deficit by $1.5 trillion.

Congressman Pallone understands that investing in all forms of infrastructure is necessary to ensuring a strong economy. To that end, he introduced The Leading Infrastructure For Tomorrow’s America Act—or LIFT America Act—which sets out five years of funding for essential infrastructure improvements, job growth, and greater protections for public health and the environment.

He also supports the rehabilitation and modernizing of the Gateway Tunnel Project, which would improve rail infrastructure from Newark to Penn Station NYC and add additional Hudson River tunnels. He, along with his Congressional New Jersey and New York colleagues, has kept pressure on the Trump Administration to uphold their financial obligations to the project. In fact, last Congress, he voted for a two-year comprehensive transportation reauthorization bill (Fixing America’s Surface Transportation Act) to upgrade America’s infrastructure and put Americans back to work. The transportation jobs bill enables mass transit and bridge-and-road construction projects, including 54,000 jobs in New Jersey. It was signed into law by President Obama.

Congressman Pallone is a champion of students and teachers and will take on the corporate agenda to gut funding of our public schools. One of his top priorities is to increase funding for public education so that all of our kids, not just those who can afford it, have the opportunity to go to college or learn a skilled trade. As a representative of world-class universities in the sixth district, he is committed to increasing Pell Grants for students and has supported legislation to keep student loan interest rates low and outlaw predatory student loan practices.