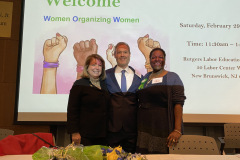 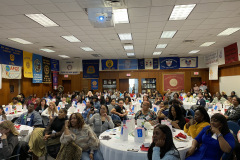 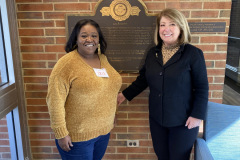 “The greatest equalizer for women is a union contract,” Brennan continued.

Brennan praised the WOW Committee for its ongoing efforts toward spotlighting the challenges faced by women in every type of workplace. She noted that the state AFL-CIO’s own Women In Leadership Development (WILD) program trains and supports women who organize themselves into action groups such as WOW.

“Women have incredibly transferable skills, even if they don’t always realize it,” Brennan told the appreciative crowd at Rutgers Labor Center in New Brunswick. “They’re excellent negotiators as they deal with their families. They’re conflict-resolution experts; have you ever seen kids fighting over the remote?”

The American Federation of State, County and Municipal Employees New Jersey represents more than 20,000 members throughout the Garden State, and women make up nearly 60% of the membership.

“This is only the beginning of the AFSCME’s WOW Committee, and I’m proud of the work they’ve done,” Brennan concluded.

The New Jersey State AFL-CIO, the voice for working families in New Jersey, represents 1 million workers in every trade and profession through its affiliated unions.