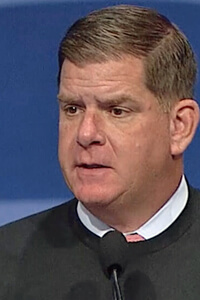 In a profoundly pro-union move, President-elect Joe Biden has picked Boston Mayor Marty Walsh to serve as U.S. secretary of Labor. Brother Walsh, the former head of the Building and Construction Trades Council in Boston, started his working life as a tradesman through Laborers Local 223 in Boston.

“This is the best sign yet that the Biden administration is serious about giving unions a seat at the table,” Charles Wowkanech, President of the New Jersey State AFL-CIO, said. “After four years of roadblocks to organizing and rollbacks of worker protections, we look forward to having a card-carrying union member watching out for working families.

“Our Labor Movement worked tirelessly to get Joe Biden elected because of his pro-worker platform,” President Wowkanech continued, “and his choice of Marty Walsh shows us that his ‘Build Back Better’ slogan means that a better America will be built with union labor.”

Walsh was elected Boston’s mayor in 2013 and was re-elected in 2017. If confirmed by the Senate, he will be the first member of organized labor to hold the position in decades.