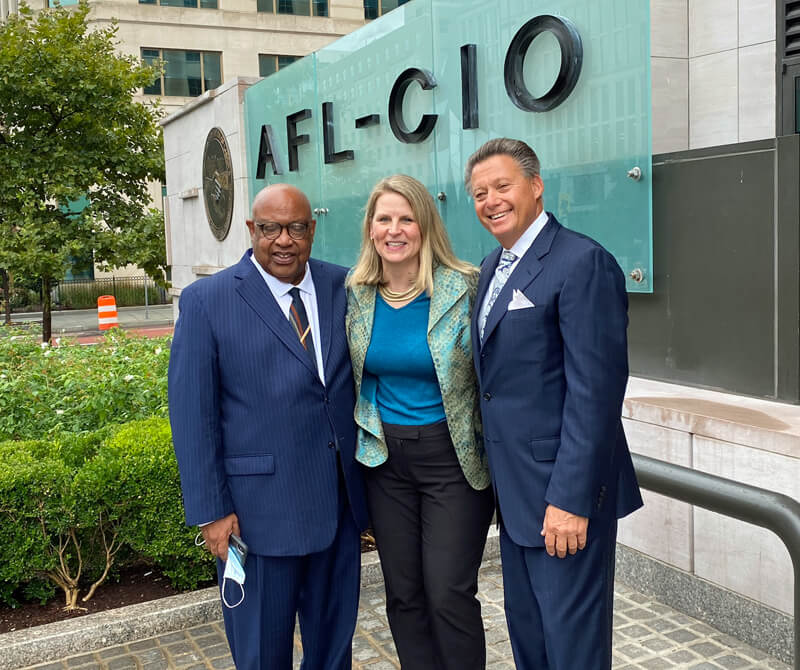 The New Jersey State AFL-CIO congratulates Elizabeth H. Shuler on her election as the first woman president of the AFL-CIO, and Fred Redmond as the first African American to serve as secretary-treasurer.

The National AFL-CIO Executive Council on Friday, August 20, elected Acting President and Secretary-Treasurer Shuler, an IBEW sister, to complete the term of Richard L. Trumka, who passed away on August 5. Redmond, the international vice president for human affairs of the United Steelworkers, will complete Shuler’s term as secretary-treasurer. Both terms continue until June 2022, the next scheduled election of national officers. New Jersey State AFL-CIO President Charles Wowkanech, a National AFL-CIO Executive Council member, voted in full support of the Shuler-Redmond team.

“Liz Shuler is making history once again,” President Wowkanech said, noting that in 2009 President Shuler was the first woman elected secretary-treasurer of the AFL-CIO. “Whether she was at the negotiating table or on the picket line, she has always displayed her lifelong commitment to excellence and activism. And her record of strong, progressive and compassionate leadership for every sector of labor promises stability for our movement and for every working family in America.

“Fred Redmond, likewise, is making history,” President Wowkanech said. “He battled economic insecurity and protected voting rights in his position with the Steelworkers, and he is recognized as a titan in the civil rights movement.

“President Shuler and Secretary-Treasurer Redmond are fully focused on the importance of organizing, which will create jobs for the future, especially in the emerging green economy,” President Wowkanech said.

“Liz Shuler’s election today brings a transformative perspective to the presidency,” New Jersey State AFL-CIO Secretary-Treasurer Laurel Brennan said. “She is committed to empowering union women, as she demonstrated time and time again through her support of our WILD (Women in Leadership Development) Conferences. And she is committed to diversity and equality, to young workers, and to eliminating the income inequality that threatens the American dream for far too many people.”

“The New Jersey State AFL-CIO wishes President Shuler and Secretary-Treasurer Redmond tremendous success,” President Wowkanech said, “especially as they continue to advocate for passage of the PRO Act, which is being renamed the Richard L. Trumka Protecting the Right to Organize Act to honor his legacy. America’s workers deserve these protections, and we know Liz and Fred will fight for them.”