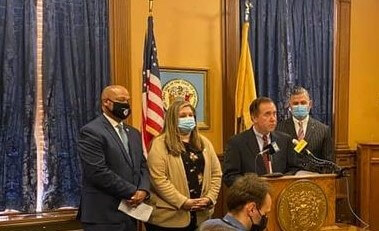 New Jersey State AFL-CIO Congratulates Craig Coughlin on his reelection as Speaker of the State Assembly.  “Speaker Coughlin (D-19) has done an excellent job leading the State Assembly during very difficult and trying times for New Jersey’s working families.  He has earned another two years as Speaker and we look forward to working with him on issues of concern to workers” said New Jersey State  AFL-CIO President Charles Wowkanech. “Because the Democratic caucus understands the importance of working family’s issues, they have assembled a strong and diverse leadership team that supports the plight of working families today.  That team includes Majority Leader Greenwald, Majority Conference Leader Quijano and Speaker Pro-Tempore Wimberly.  We look forward to working with the Speaker and his team and addressing the challenges of workers and our communities” Wowkanech concluded.

Congratulations to every elected member of the State Assembly, both Democrat and Republican, on their victories.  Heading into the 2022/2023 legislative session, the New Jersey State AFL-CIO looks forward to a productive session on behalf of New Jersey’s working families.