New Jersey State AFL-CIO Testifies Before Assembly Committee in Support of on the Health and Wellbeing of Warehouse Workers at Amazon, Supports Bills in Assembly Labor Committee

On Thursday, May 19th,  the New Jersey State AFL-CIO and Lawrence Ben of RWDSU testified before the Assembly Community Development & Affairs Committee on the health and wellbeing of warehouse workers at Amazon.

One of the primary objectives of our organization and of our affiliated unions is to advocate for laws and regulations to ensure a safe and healthy workplace. From recent COVID laws, to workers compensation reform, to fighting against occupational diseases and workplace violence, to protecting and strengthening OSHA, to best practices in workplace safety operations, the New Jersey State AFL-CIO and its affiliated unions prioritize advancing workplace safety policies on a daily basis.

What we would like to accomplish is simple – progress on worker safety in warehousing and retail operations throughout New Jersey. After the headlines dissipate, workers will still be facing similar unsafe conditions at Amazon and other retailers. We hope this committee will make worker safety a priority in the long term and work towards passage of state level legislation to achieve this.

To read the full testimony submitted to the committee, see here: 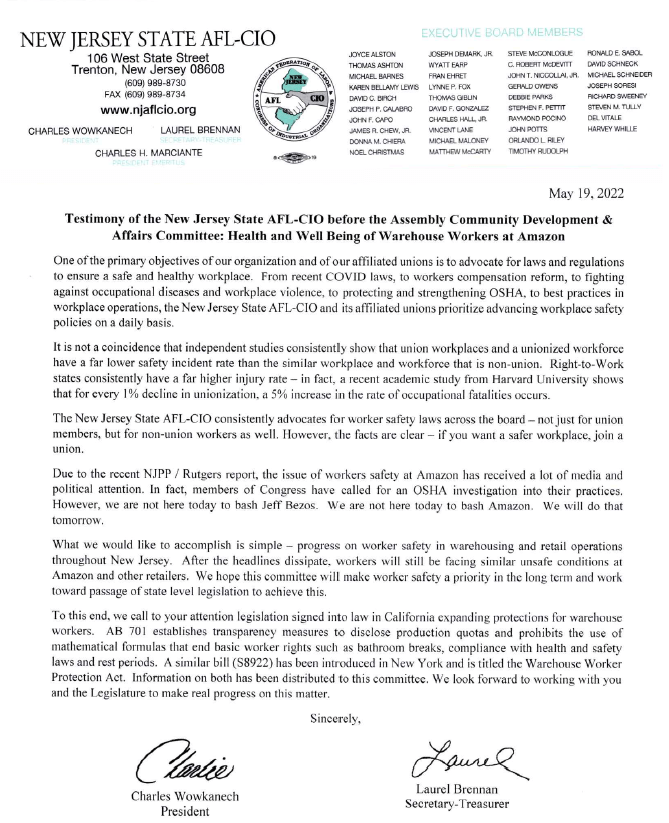 We support the Labor Committee moving A-3715 (Moriarty/ Wimberly) forward in the legislative process, and greatly appreciate the sponsors working to address the negative impact of restrictive covenant clauses on workers. Workers should be able to advance their careers and work for who they want without being subject to unfair restrictive covenants.

A-3715 was approved in a party line vote, with Democrats voting in favor, and Republicans opposed.