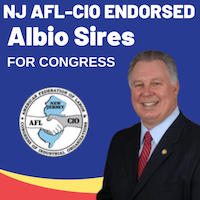 The New Jersey State AFL-CIO is proud to endorse Albio Sires, the leader we want to send to Washington to represent the 8th Congressional District. Here, we highlight the top reasons to vote for Congressman Sires.

A true champion of working people, Congressman Sires embraces unions and vehemently opposes attempts to enact “right to work” laws that would increase corporate profits at the expense of our wages. After the Supreme Court’s ruling on Janus v. AFSCME, he released the following statement:

“A union’s whole purpose is to ensure that working Americans have a measure of input over the decision-making process that determines their salaries, their working hours, and what their employers can and cannot demand from them. Today’s ruling by the Supreme Court on Janus v. AFSCME overturns over 40 years of judicial precedent and has endangered future workers’ ability to advocate for themselves. Collective bargaining is the foundation of workers’ empowerment, which is why it should be funded by everyone who benefits from it. The Court’s decision today sets back workers’ rights by decades and makes it considerably more difficult for unions to keep advocating for fair pay and fair workplaces.”

Congressman Sires has fought continuously to ensure that middle-class Americans are provided with the necessary financial relief during times of difficulty. On his campaign website, he writes, “As our nation’s unemployment rate continues to decrease, we must preserve funding for the millions of families who temporarily rely on unemployment benefits as they seek further employment. Helping those who have lost employment through no fault of their own while they get back in the job market is a sensible way to ensure that money is moving through our economy.”

He also believes that raising the minimum wage is a critical step in closing the opportunity gap and building an economy that works for everyone. He writes, “By raising the minimum wage, we can restore fairness for working men and women across the country.  No hardworking American should be forced to raise their family in poverty, but unfortunately the current minimum wage allows for just that. I believe that an increase in the minimum wage is not only the moral thing to do, but that it would also provide a much-needed boost to our economy.”

In an ongoing effort to shape livable, safe, and dynamic communities, Congressman Sires is a member of both the Democratic Caucus’ Livable Communities Task Force and the Congressional Urban Caucus. He works with the other members of Congress in these groups to promote legislation that focuses on creating safe and more livable communities in which families have equal access to education, economic, housing and transportation opportunities.

He also supports investments that will keep our nation moving in the right direction.  On his campaign site, he writes, “Investment in our transportation infrastructure is vital to enhancing our economy, increasing our safety, maintaining our global competitiveness, and most importantly improving our quality of life. Our nation’s infrastructure is in dire need of investment. In urban areas, such as the 8th District, transportation plays a critical role in the soundness of our economy and quality of life. I support long-term investment in our nation’s transportation infrastructure and believe it is imperative that Congress works towards finding a long-term solution that addresses these needs.”

There is an urgent need to repair and modernize our nation’s crumbling infrastructure, according to Congressman Sires. As a member of the House of Representatives’ Transportation and Infrastructure Committee, he has long worked to ensure that communities in New Jersey and around the country have the resources they need to fix their transportation networks as well as upgrade critical energy and water infrastructure. In fact, as a member of the conference committee to negotiate the Fix America’s Surface Transportation (FAST) Act of 2015, he worked to provide New Jersey with over $5 billion for federal-aid highway funding and over $3 billion for transit program funding. Today, the Congressman is actively involved in reauthorizing the Surface Transportation bill, supporting increased transit and commuting options, safer streets, and more efficient goods movement.