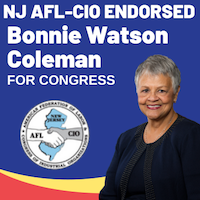 The New Jersey State AFL-CIO is proud to endorse Bonnie Watson Coleman, the leader we want to send to Washington to represent the 12th Congressional District.

Throughout her career, Rep. Bonnie Watson Coleman has been a dedicated and outspoken advocate for women, the poor, the disadvantaged, and the vulnerable. Shattering racial and gender barriers, Rep. Watson Coleman is the first African American woman to represent New Jersey at the federal level.

“This is a watershed moment in the stream of conservative efforts to rig the economy against working families, and I am deeply disturbed by the impact it will have on their ability to negotiate livable wages,” she said. “Unions are essential to a strong middle class; as Republican attacks on them have intensified, we’ve seen wages stagnate and that middle class shrink. I continue to stand with unions and the millions of workers they represent as we fight together for fair pay, access to healthcare, paid leave and the many other basic needs of working families.”

Rep. Watson Coleman maintains that Americans are still in the process of recovering from the recession, and while it may take some time before American optimism in the economy returns, the creation of opportunities for economic prosperity is more important than ever. With that, she believes that fixing the economy should be a bipartisan effort and that there are many issues on which to find common ground.

According to her, one way to get our economy back on track is by modernizing our nation’s infrastructure and emphasizing innovation. She claims our aged and at times dangerous roads, bridges, and transit systems provide opportunities to put people back to work. This is why, in 2010, she supported the construction of the Access to the Region’s Core Tunnel Project (ARC), which would have created 6,000 jobs for people in New Jersey, brought billions of dollars into the state, and eased traffic congestion for commuters in New Jersey and New York.

Rep. Watson Coleman also believes that we must keep high-paying jobs on our shores by negotiating trade agreements that are fair to the American worker, and we need our tax code to incentivize investment in the American economy. Additionally, she says we should move from a minimum wage to a living wage.

Moreover, in Congress, Rep. Watson Coleman will act as a leading voice in the fight for access to affordable health care for all Americans. Prior to the implementation of the Affordable Care Act, millions of Americans were deprived of the ability to obtain quality and affordable health care. Unlike the Republicans and Tea Partiers whose first agenda item would be to repeal the Affordable Care Act, Rep. Watson Coleman believes that the Act should be fully implemented and supported to ensure that it works the way it is intended, especially in New Jersey. On her campaign website, she writes, “Our focus should be on keeping the healthy, healthy. We should reduce the costs of acute care and emergency room visits. We should consider the needs of individual communities in the implementation of health care policies.”

Bonnie Watson Coleman represents our shared democratic values. She is an advocate for hardworking families and cares deeply about the direction our nation is headed. We need her passion and her strong commitment to the American people to ensure that each and every individual has an opportunity to obtain the American Dream. This is why we urge you to vote for her on November 6.