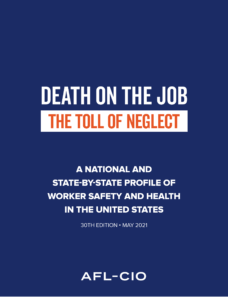 An annual report released on Tuesday, May 4, by the national AFL-CIO shows that 74 New Jersey workers were killed on the job in 2019, and 69,000 suffered reportable injuries.

The report, titled “Death on the Job. The Toll of Neglect,” marks the 30th year the AFL-CIO has produced its findings on the state of safety and health protections for workers within the United States. This analysis is based on the most recent complete data from the Bureau of Labor Statistics.

The rate of fatal job injuries in New Jersey in 2019 was 1.8 per 100,000, far better than the national rate of 3.5 per 100,000. Separately, preliminary data from the federal Occupational Safety and Health Administration show 246 workplace-related deaths in New Jersey in 2020, with 176 of them traced to COVID-19 infections.

“Workplace safety is always a top priority for the New Jersey State AFL-CIO,” said Charles Wowkanech, President of the New Jersey State AFL-CIO, “and we never stop fighting for it. We are privileged to have pro-labor state and federal elected officials advocating on behalf of working families. We have the right to a safe workplace and a voice on the job, and we thank our lawmakers, especially for the COVID-19 safety and compensation measures they sponsored.

“But even as we focus on the coronavirus and making sure there’s enough PPE,” President Wowkanech continued, “we cannot and will not forget every other sector of labor where safety standards and protocols need reinforcing.”

Nationally in 2019, 5,333 working people died on the job and another 95,000 died of occupational diseases. Every day, on average, 275 U.S. workers die because of hazardous working conditions.

Fifty years ago on April 28, the Occupational Safety and Health Act went into effect, promising every worker the right to a safe job. The labor movement and its allies drew national and state attention to work-related deaths, disease and injuries. They organized tirelessly for safer working conditions and demanded action from their government – and achieved it.

But today, due in part to the irresponsible anti-worker policies of the previous administration, OSHA’s meager resources are in freefall. Federal OSHA now has only 774 safety and health inspectors, with 40 for all of New Jersey. It would take federal OSHA 183 years to inspect all covered New Jersey workplaces once.