National AFL-CIO President Richard L. Trumka has introduced the Workers First Agenda to fight back against COVID-19 and build an economy that puts more power and prosperity into the hands of working people. He also discussed the role the labor movement has in preserving democracy after last week’s riot incited by President Trump.

Please click here for a downloadable copy of the Workers First Agenda.

“At the center of this agenda is the PRO Act—Protecting the Right to Organize. This worker empowerment legislation would allow millions to freely and fairly form a union. So we can raise wages and expand health care. So we can make workplaces safer and retirement more secure. So we can expand opportunities for women, immigrants, people of color and the LGBTQ community. The PRO Act is more than labor law reform legislation. It’s an economic stimulus bill. It’s a civil rights package.”

“That is why workers’ safety is another priority of our agenda. We will never get this pandemic under control if we cannot protect working people. That starts with emergency COVID-19 OSHA and MSHA standards so we can protect workers from this virus.”

“What happened at the Capitol was the result of many things. Economic and political systems failing to serve the majority of working people. The Electoral College being so arcane that a president and members of Congress thought they could manipulate the rules to steal an election. Fear. Hate. Disinformation. Conspiracies. And yes, white supremacy. If striking workers stormed the Capitol, tactical teams would have been deployed in seconds. And if people of color had crossed the barricades, a massacre would have followed.”

“That is why the AFL-CIO’s general board called on President Trump to resign or to be removed from office. He incited this insurrection. He pushed judges and lawmakers to overturn democratic election results. He knew exactly what he was doing. There was no voter fraud—we all know that. Josh Hawley and Ted Cruz know that. Even Trump knows that. Trump is outraged because Black and Brown Americans voted, and their votes counted.” 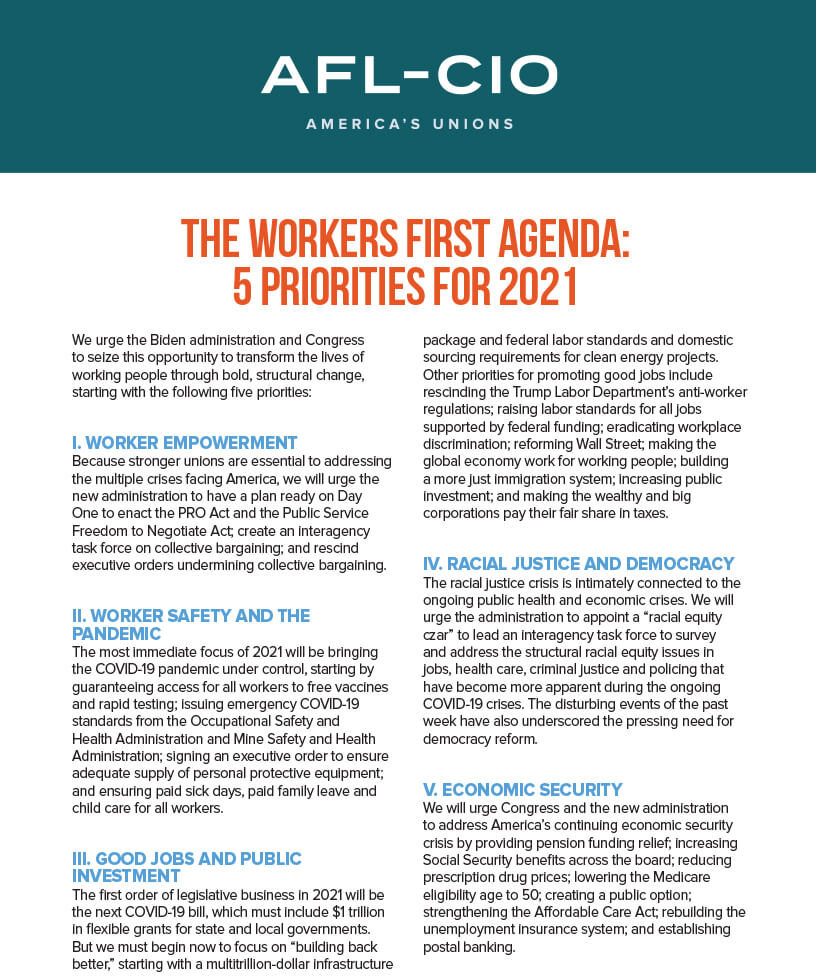